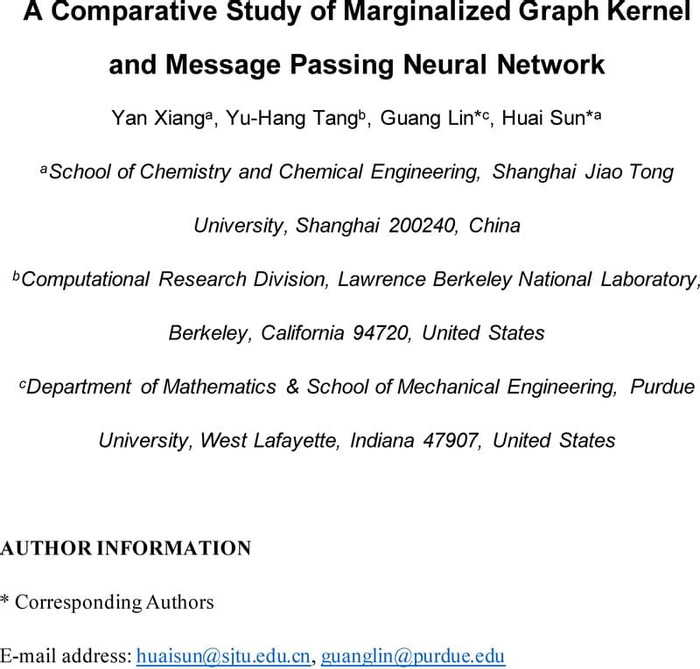 <p>This work proposes a state-of-the-art hybrid kernel to calculate molecular similarity. Combining with Gaussian process models, the performance of the hybrid kernel in predicting molecular properties is comparable to that of the Directed Message Passing Neural Network (D-MPNN). The hybrid kernel consists of a marginalized graph kernel (MGK) and a radial basis function (RBF) kernel that operates on molecular graphs and global molecular features, respectively. Bayesian optimization was used to get the optimal hyperparameters for both models. The comparisons are performed on 11 publicly available data sets. Our results show that the predictions of both models are correlated with similar performance, and the ensemble prediction of both models performs better than either of them. Through principal component analysis, we found that the features extracted by the hybrid kernel are similar to those extracted by D-MPNN. The advantage of D-MPNN lies in computational efficiency, while the advantage of the graph kernel models lies in the inherent uncertainty quantification and accurate uncertainty quantification. All codes for graph kernel machines used in this work can be found at <a href=”https://github.com/Xiangyan93/Chem-Graph-Kernel-Machine”>https://github.com/Xiangyan93/Chem-Graph-Kernel-Machine</a>.</p>

Courtesy: Shutterstock/J.Schelkle Quantum advantage is a hot topic, with multiple experiments approaching (and some even surpassing) the point at which a quantum technology performs better than its classical predecessor. But how often does quantum advantage arise, and under what circumstances is it possible? These are some of the questions that David Arvidsson-Shukur, Jacob Chevalier Drori…

Media coverage of quantum computing often focusses on the long term potential for these devices to leave classical computing in the dust. But what about the rudimentary quantum systems that are already being developed and tested by technology companies? What are the latest advances in the field? And what might these systems realistically be able…

In this episode of the Physics World Weekly podcast Google’s Sergio Boixo explains why the tech giant is building its own quantum computers. Boixo will be a plenary speaker at the upcoming Quantum 2020 virtual conference, and we will be interviewing other plenary speakers in future episodes of the podcast. Next up is Ramon Barthelemy…

Monday, November 9, 2020 – 12:00pm to 1:00pm Location: Virtual Presentation Remote Access – Zoom Speaker: SILVIO MICALI, Ford Professor of Engineering https://www.csail.mit.edu/person/silvio-micali Algorand – The Truly Distributed Blockchain In its ideal model, a blockchain consists of a digital ledger of unalterable data, readable by everyone, to which every everyone can add new data. If…

Wednesday, March 3, 2021 – by Matthew Wein Kit Needham has been named assistant dean for entrepreneurship initiatives. Katharine “Kit” Needham has been named the School of Computer Science’s inaugural assistant dean for entrepreneurship initiatives. Needham, who also serves as the director of Project Olympus, joined Carnegie Mellon in 2008 to work on the then…